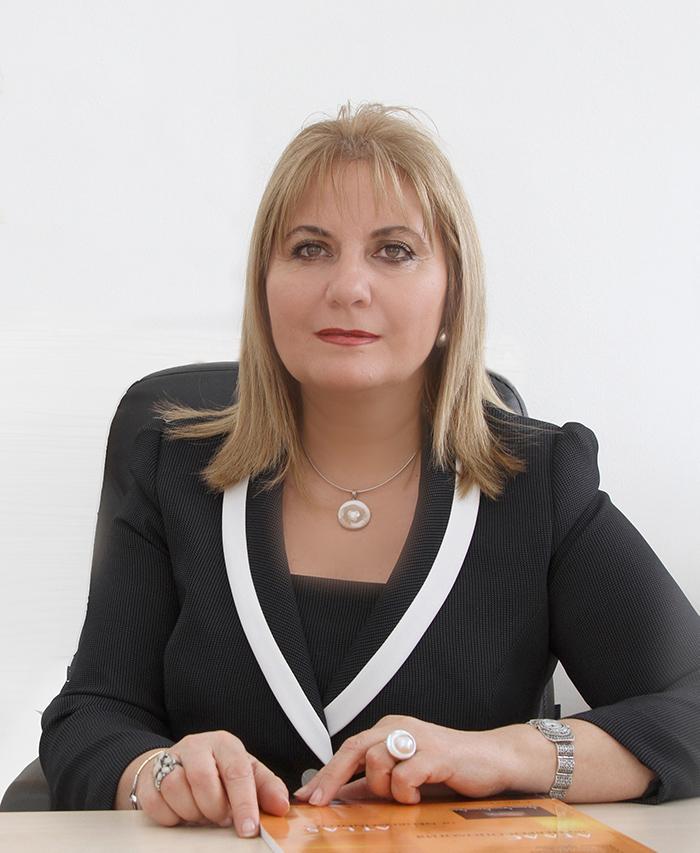 Acad. Prof. EKATERINA TITIANOVA, MD, PhD, DSc
Head of the Clinic of Functional Diagnostics of Nervous System, Military Medical Academy - Sofia
Professor of Neurology and Head of Department, Medical Faculty of Sofia University "St. Kl. Ohridski"
Academician of the Bulgarian Academy of Sciences and Arts
Academician of the Serbian Royal Academy of Sciences and Artists
President of the Bulgarian Society of Neurosonology and Cerebral Hemodynamics

The Officers, the Executive Committee and all the members of the Neurosonology Specialty Group of the World Federation of Neurology (NSG/WFN) deeply mourn the early death of Ekaterina Titianova and her husband Chavdar Rusev. Apart from the outstanding scientific and academic achievements and kindness of Prof Titianova, the friendliness and exceptional hospitality of both of them will be unforgotten.

We want to express our sincere condolences and sympathy to their families.

We will honor Prof. Ekaterina Titianova in a Memorial Lecture during the Joint Conference or the Korean Society of Neurosonology and the NSG/WFN in Seoul, Korea, in November 2022.

Prof. Titianova graduated in medicine in 1982 at the Medical Academy - Sofia. She started working as a neurologist at the regional hospital in the town of Gotse Delchev. In 1983 she entered the Department of Neurology of the Medical Academy, Sofia. Later she became head of the Neurology Department of the University Specialized Hospital of Neurology and Psychiatry "St. Naum” EAD, Sofia and the Laboratory of Clinical Neurosonography. In 1987 she acquired a degree in nervous diseases, in 1990 - an educational and scientific degree "Doctor", and in 2007 - a scientific degree "Doctor of Science". Since 2003 she has been Associate Professor at the Military Medical Academy - Sofia, and since 2009 - Professor of neurology.

She was an external expert at the Ministry of Health, the National Agency for Evaluation and Accreditation at the Council of Ministers, the National Health Insurance Fund and the European Commission.

She was an innovator in the study of gait through electronic analysis of steps and developed new directions in neurorehabilitation in Bulgaria.

She was recognized as an international expert in neurosonology - introduced, developd and approved new directions in the ultrasound diagnosis of the nervous system at home and abroad and was the founder of the Bulgarian Society of Neurosonology in 2005.

Her scientific output includes monographs, textbooks, manuals and over 250 publications at home and abroad, which are internationally cited.

She was principal investigator, national coordinator and participant in national and international studies in the field of stroke, multiple sclerosis, epilepsy and Parkinson's disease. She has been a guest lecturer in Mexico, Finland, Serbia, Croatia and Georgia.

Prof. Ekaterina Tityanova was an active member of national and international organizations and foundations and a coordinator for Bulgaria in postgraduate programs at the World Federation of Neurology.

She was the founder and chairman of the Bulgarian Society of Neurosonology and Cerebral Hemodynamics and she was a member of the Executive Committee of the Neurosonology Specialty Group of the World Federation of Neurology.

She was established as an international expert on strokes for Central and Eastern Europe and a representative for Bulgaria in the group "Women's Stroke Initiative in Europe" of the European Stroke Society.

She was the founder and editor-in-chief of the periodical scientific bilingual English-Bulgarian journal Neurosonology and Cerebral Hemodynamics, which is referenced in the Emerging Sources Citation Index. She was a member of the editorial boards of the journals Neurosonology (Japan), Archivos de Neurociencias (Mexico), the electronic journal Oruen and 6 national scientific journals.

Prof. Ekaterina Tityanova was the winner of the Merrill Spencer Award of the European Society of Neurosonology and Cerebral Hemodynamics (2009), the Golden Hippocratic Oath of the Balkan Association for the History and Philosophy of Medicine (2015), the National Medical Award in the World recognition in medical science ”(2017) and“ Medicine and Education ”for the establishment of a school of Neurosonology (2018). She was awarded the Badge of Honor of the Ministry of Defense (2016), the Peter Beron Medal of the Bulgarian Academy of Sciences and Arts (2017) and the Diploma of the Bulgarian Red Cross for Humanism (2018). She was the winner of the 2018 Pythagorean Grand Prize for overall contribution of the Ministry of Education and Science.

Founding president of the European Society of Neurosonology and Cerebral Hemodynamics. https://esnch.org/in-memoriam/

It is unusual to write a celebration of life of a businessman to be published in a newsletter of a scientific medical society. But Dr. Alec Eden, born in Sussex , England was an outstanding and stimulating personality, scientist and businessman. His importance for our society, the NSRG, lies in his role as chief executive of the Eden Medizinische Elektronik (EME) from 1981 to 1992. Due to his inexhaustible energy, he was responsible for a considerable part of the worldwide dissemination and acceptance of Transcranial Doppler Sonography (TCD). TCD has become a real breakthrough for Neurosonology. It was primarily made possible by the Norwegian Rune Aaslid, who developed the first Transcranial Doppler device in the neurosurgical clinic of Prof. Nornes in Oslo and later Bern Switzerland. The development of extracranial Doppler sonography in the decade before was slow and had to fight for acceptance in the medical community. TCD on the other hand spread like wildfire from Europe to North America and to the Far East. Constantly travelling through the world Dr. Eden brought together many researcher, sponsored congresses and organized meetings himself (The Web and Email were not yet available). Dr. Eden was fascinated by the ultrasonic methods, especially TCD and its neurologic as well neurosurgical applications. His enthusiasm was authentic. He published 15 papers in scientific journals or chapters in books about Doppler sonography as first author or co-author. In addition he developed interest in Christian Doppler, the man, his research, his family and his life in Salzburg and Prague. He described special aspects of Doppler’s life in several Journals such as Ultrasound in Med & Biol and published the book: “The search for Christian Doppler” 1992 by Springer Verlag/ Wien including many documents from the archives.

As a consequence he was appointed president of the Christian Doppler foundation, Salzburg. Dr. Eden received numerous awards from universities and institutes, among them Winston Salem; Birmingham, Alabama; Peking; Salzburg and Prague. He was honored by the Japan Academy of Neurosonology and the American Society of Neuroimaging. He received the Order of Merit in Gold , Republic of Austria. All this is indeed unusual for a businessman.

Dr. Eden’s activities were not limited to medical aspects. He promoted art exhibitions and was engaged in supporting problems in the third world through UNICEF and Rotary international.

Dr. Eden passed away following a severe stroke in February of this year. He left behind his wife Frauke, two children and four grandchildren. Our sympathy goes to his family. The Officers, the Executive Committee and all members of the NSRG are deeply saddened about the passing of a great pioneer of Neurosonology, outstanding researcher, as well as a remarkable individual. His knowledge, thoughts and attitudes inspired our community and impressed everybody who got to know him closely. We will miss him very much and express our sympathy to his family.

We will honor Prof. Hiroshi Furuhata in a memorial lecture during the 16th NSRG Meeting in Sofia.

Professor Furuhata was a great scientist and a great man. He will stay for new generations and for all of us, as a prototype of scientist, teacher and humanist, contributing to the advance of medicine and the world's heritage.

We will all miss him.

His notable contribution to the field of neurosonology and his able leadership in experimental sonothrombolysis research won him respect both nationally and internationally. We shall always remember him, not only as a scientist but as a friend and his humanity. We offer our sincere thanks to all those who showed him kindness during his lifetime.

I mourn this excellent man, outstanding scientist and gentleman and I will miss him for a very long time.

Pr Hiroshi Furuhata was a great scientist and a gentleman. We will miss him.

Hiroshi was a great scientist. He made a great contribution in the knowledge on basic research of sonothrombolysis. He was a charismatic mentor of many young neurologistis in Japan and an endless souce of ideas and projects, but most importantly, he was a very good friend.

This is a great loss of a friend, a peer and a wonderful human being to those of us who got to know him closely and enjoyed his company for many years. I'm very sad will miss him a lot!

I wonder if Jikei University would consider naming the Biomedical Engineering Laboratory in his name since he accomplished so much and trained many neurosurgeons and scientists over years there. Best wishes to all and may he rest in peace!

Professor Furuhata was not only the pioneer of our discipline but a a kind hearted  man who touched everyone's life - he will be sadly missed. God bless his soul! The ESNCH will commemorate Professor Furuhata.

This are very bad news and we are in deep regret. I was very glad to know him and to have him at the ESNCH meeting in Düsseldorf as an important scientific as well as friendly colleque and gentleman. We will miss him.

Our "neurosonology world" has lost one of great pioneers and researchers in the area of ultrasound. I am sure that his colleagues and many young Japanese sonographers will continue his path. My sympathies to his family, friends and colleagues.

I would like to express to you, to his colleagues and especially to his family, my deepest sympathy on the loss of Prof Furuhata. He was a pioneer in this field and has brought tremendous contributions.

It is indeed a very sad to hear this bad news. Professor Furuhata was a great scientist and a leader in the world of neurosonology. He was also a great teacher for many of us in Asia and especially in Japan. Everyone in the field of neurosonology will miss him a lot. Please kindly send my condolence to his family.